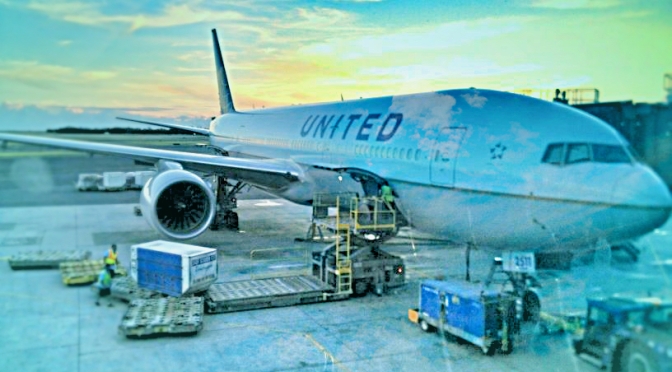 On a recent episode of Jimmy Kimmel Live!, one of Kimmel’s guests took on role-playing the results of an Expedia poll describing the most annoying airplane passengers you might encounter when traveling. The guest actor was none other than the incomparable Sir Patrick Stewart and the sketch was very entertaining. Kimmel and Stewart shared the caustic characters of Chatty Charlie, Stinky Snacker, Seat Climber, Seat Kicker and Landing Clapper as the most annoying. This sketch got me thinking. If I were to compose my own list of annoying personalities, who would make the cut? This post features my breakdown of several special characters unfortunately encountered during my many hours spent airborne. I encourage you to check out the video here to watch Sir Patrick expertly nail the five listed above, and do read on for my particular brand of annoying passenger behavior.

We’re up in the air and I’m settling in at last for a little light airplane nap when suddenly “THWACK!” Your brutal handling of the window shade makes me visibly jump from the sound and now the inside of my eyelids are on fire. I’m forced to make my Tom Hanks face, searching for a plane from my deserted beach. It would be great if you would consider whether there might be a blinding ball of gas reflecting off the wing into your neighbor’s eyes before opening, as she is rather fond of keeping her corneas. And go slow. It is not an elastic retractable window shade and therefore should not sound like one. Thanks.

I’ll be forthcoming and honest, I do not have children of my own. I respect that airplane travel with said offspring could be one of the most challenging experiences for any parent. But there are some parents that are doing it right. They manage to keep their kiddos from kicking the seats in front of them, or tearing up and down the aisles, squawking loudly for attention. Basically, they pay attention. My last flight to Honolulu from Las Vegas featured a lone mother with two children who sat in the middle seat between them. Sporting her massive Beats headphones, she pretty much zoned out while they slammed armrests, worked the window shade incessantly, threw food, bounced the seats all around. Her answer to calming them down? Giving them candy and hand held video games with the sound on. She didn’t care about the sounds driving everyone else mad; she was lost in her freedom bubble, courtesy of Dr. Dre. I don’t expect kids to be the picture of good behavior, but I do expect some serious effort on the part of the parent(s). If I see you trying, you’re off the hook. If you’re wearing Beats and you have hellions; prepared to be loathed by all passengers around you.

One of the categories in the Expedia report was what Kimmel called the Stinky Snacker. I agree that is totally annoying to have smelly food on board. Beef jerky and an onion sandwich, really? However, what’s worse is having to hear it. Channel your mother and close your damn mouth when you chew. Absolutely no talking. If God wanted us to talk and eat at the same time our vocal chords would be in our nasal passages. Clear your gob hole and then we can talk. Swish it down with a beverage and avoid any possible UFOs potentially headed in my general direction.

Let’s be clear right now, if the beverage mentioned above is finished, if you start chewing on the remaining ice I will grab the cup from you and hold it menacingly. I don’t quite know what I would do next since I would prefer not to get tackled by an air marshal, but it will be taken, and I will find your dentist and totally tell on you. No one can sleep/read/exist calmly when the Titanic-meets-iceburg re-enactment is on repeat in the seat next to them. Do not ever chew your ice cubes next to me. Or anyone else for that matter. It will make a sane person crazy.

No one likes to talk about it, but everyone has been the unfortunate recipient of a nasty gassy on a flight before. I believe it could even be a secret factor in contributing to airplane sickness. A fart cloud might happen to you every time you fly. It might even be you creating said cloud. All I ask of The Farter is this: if you know some foods makes you leak out your rear end, don’t eat them on this plane. Bring a little pepto or beano for the long flights. Or a plug. Whatever it takes to keep it to yourself. You might be immune to your own rank stench, but I’m going green back here.

We’ve landed. Hooray! The time has come to de-plane. There’s a natural order to this. You allow the rows in front of you to clear out and then it’s your turn. If you have a short layover and you’re desperately trying to make your flight, be a human and communicate with those around you. You’ll advance much faster if you have everyone around you on your team helping you move forward. Don’t be that groaning, toe-tapping, under-breath mumbler that no one likes. And if you announce that “some of us have a flight to catch” to no-one in particular, I will be tempted to pop you in the face with my neck pillow. Stop it. The majority of my flight experiences haven’t featured all these characters at once (praise be), but I have encountered each of them on more than one occasion. Thus, I’ve been driven to develop tactical defenses and management devices for each:

I combat both the chewers and children with earplugs of headphones of my own (not Beats though, sorry Dre), the shade blinder with an eye mask, and the farter with scented hand lotion applied just under the nostrils. The ice chomper gets straight-up-spoken-to. “Please sir/ma’am, I’m having trouble sleeping due to your ice chewing. Will you please refrain? Mahalo.” Lastly, to prevent the line jumper I simply stand up and block the aisle to allow those in my row and beyond their right to exit when their turn arrives.

Or, like one should in any social situation where other people behave less than admirably, I just try to get over them. They make great fodder for storytelling and casual, comfortable complaining, but in the end, that’s all they ever are. There’s no greater feeling when flying to actually sit back, relax and allow yourself to be amazed that a plane is whisking you off to your destination, at 30,000 feet in the air. Annoyances be damned. As comedian Louis C.K. likes to say about the miracle of human flight: “You’re in a chair… in the sky.” Sometimes a little perspective makes nearly every annoyance seem trivial. Except perhaps, chewing ice cubes.

I am an ardent seeker of adventure. I am a voracious reader. I've a deep-rooted love for all things travel. I am a nerd. I like to play at a little bit of everything, but mostly photography, writing, and learning. My favorite things are the ocean, libraries, underdogs, stories, animals, and experiences. Also ice cream. And Doctor Who. And Post-It notes. Dancing, herb gardening, the milky way and the rest of the night sky. I've been an innkeeper, a dolphin trainer, a barista, a pretend flight attendant, a property manager and a keynote speaker. It's fair to say I'm either a great juxtaposition or a hot mess. I really like pirates. Sometimes I imagine I am cool by association. I married my best friend in the ruins of a historic pirate fort. He is the cool one. I seek to explore the world and write with a true passion for adventure crafting, and often, adventure surviving.

A Stairway To Fashion

imagination is the key

Sports and Movie comments and opinions

Just a small town girl who writes about Christian stuff.

Thoughts on Writing, Art, and Life