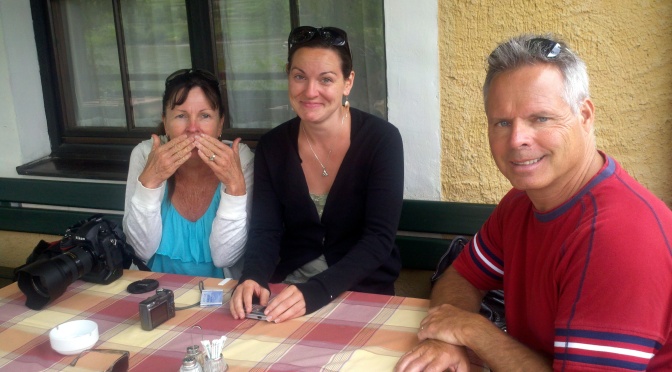 How a Small Misstep Led to Our Biggest Adventure in Wachau

When visiting Vienna, Austria, there is so much to do within the city it is perfectly reasonable to never leave the city limits during your entire stay. Such was the case for the first week of my 10 day trip to Wien, but an itch to see some of the countryside began to tug at the corners of my trip itinerary. My sister Laura is spending a year as an au pair for the lovely Luna in Wien’s 9th district, which brought my parents and I across the Atlantic (and the Pacific for me) to the Imperial city. After experiencing much of Wien’s delights, Laura arranged a day for us outside the city to float the Danube and witness the famed Wachau Valley. An hour’s train ride out of the city brought us to the delightful town of Krems (Krems an der Donau), thought to be one of Austria’s oldest towns. We spent about an hour wandering the streets before our boat’s departure, happily exploring narrow roads and historic houses dating back to the 1500s and before.

Just as we were about to turn back to the Pier, Laura decided to push on just a little further and we stumbled upon an amazing church rising out of the surrounding homes. A steep stairway behind the church led us to an unparalleled lookout across the down and down to the Danube.

Atop the stairs we found a sanctuary, (I’m currently attempting to research its history) a beautiful Christian shrine that just felt hallowed. While circling for the best photo angles, I discovered a small window into the basement that was easily accessible and unbarred. Peering into the dank darkness below, straining my eyes for glimpses of old doors and hidden rooms, I physically recoiled in shock as I discovered the entire space below the church was filled with human remains. Yes, I said human remains, and no, I’m not kidding. Maybe it’s because I’m an American and our history and ancestors pale in comparison to the rest of the world, but I sat in a haze of shock and disbelief at the base of that temple trying to make sense of the bodies laying below. I paid my respects and began to come to terms with the staggering history of the region I knew so little about and continued the trip down the Danube with a renewed sense of respect and regard.

All aboard the MS Prinz Eugen, one of the DDSG Blue Danube sightseeing cruise boats departing from Krems, cruising to Melk and back again. We boarded the ship, certainly a bit dated but in no way uncomfortable, and settled in on the top deck for photos and wonderment gazing. I was shocked to hear loudspeaker announcements in no less than six languages, describing the town of Krems, the monastery across the river and the upcoming town of Dürnstein.

A little back story: when Laura found us the cruise, we were under the impression that the boat docked at each port listed in the itinerary and we had a certain amount of time to explore the town before re-boarding and continuing on. With that foreshadowing, and the understanding that some things get lost in translation, you can come back to the story.

Ahhhh, Dürnstein. Our loudspeaker described to us the historical importance of the incredible remnants of Dürnstein castle overlooking the town and we were giddy with anticipation. Way back in 1192, King Richard the Lionheart (England, in case you aren’t hip with the Kings) was returning to his home country after the conclusion of his crusades and captured by Austrian Duke Leopold the first! He was held captive there until turned over to Emperor Henry VI at Trifels Castle and held for three weeks for an enormous ransom. Needless to say, the Corlin family was rearing at the bit when the boat docked at Dürnstein, and we attempted to communicate with the boat crew about how much time we had to explore. A combination of one of the deck hands telling us in broken English that we could get off but just for a minute and then they were leaving again, the confusion of what exactly this boat tour was about, and the determined focus to get up to that castle was to prove our big downfall. After the four of us rushed across the gangway, looking for a good vantage point to take a picture of the castle, everything went wrong. The boat left. As in, bye, bye, we’re going on to the next stop and oops, you probably shouldn’t have gotten off, you silly Americans. There were a few “wait! what? oh no! this isn’t happening! He said… You’ve got to be kidding! Noooo! I thought you said…” which didn’t take long to peter out as the gravity of the situation settled heavily upon us. Where are we, exactly? And what the heck are we supposed to do now? Then, as if by magic, I see Laura speaking to a kind woman in uniform who’d been at the dock all along. She works for Blue Danube! She’s telling us the next boat is in three hours! She’s… speaking English?! Who is this saintly woman, the only person visible in the vicinity around us, calmly telling us we’re up a creek but there’s another boat due in three hours. Mom starts her fast walk, stop, throw up the hands, walk, stop, exasperated sigh. Laura’s stuck in repeat, we’ll miss our train back to Vienna, we’ll miss our train, we’ll miss our train. Dad’s thinking, hard. I’m frozen, fighting off the little voice inside that’s saying ‘now you’ll have time to go see that castle!’ with the wooden stick of logic and the need to find a solution to help the family. The uniformed saint must have eyed our motley crew and taken pity on us, for at that moment, she decided to save us. “Excuse me, but I actually have two stations and I’m bound for Spitz now. If you come in my car I can take you to the next station, we can beat the boat, and you’ll be back on schedule.” The clouds parted, a shaft of sunshine burst through, right on to our heroine’s face, a choir of angels on high belted a hallelujah and… saved. And just like that, we were packed into a VW golf and racing through the streets of Dürnstein with Elizabeth behind the wheel, narrating as if we were on a tour and all part of the plan.

Flight of the Bumblebee playing faintly in my ears, we roll into the lovely town of Spitz, 40 minutes in front of the boat. Elizabeth’s parting words: “get back on the boat, and stay on it.”

The next 40 minutes we filled at a restaurant directly across from the pier, with a view far up the river to spot our boat long before it arrived. We ordered a bottle of wine (when in Spitz…) and an apricot dessert, since Elizabeth said it’s what Spitz is famous for. The wine was incredible and the dessert… more hallelujahs from on high.

A strudel with apricots, syrup and meringue, I can not put the taste into words. Paid our check, bought a bottle of wine from the gift shop and an apricot jam, ran to the docks, gave Elizabeth the jam and re-boarded the boat, slightly tipsy from the strong wine and adrenaline; laughing into the shocked faces of the Blue Danube crew who were no doubt asking each other “who are these people and how did they get here before us?”

The rest of the tour was full of tears of laughter, a gazillion photos and another bottle of wine imbibed in the on-board restaurant when it started to pour outside. We saw more castles, gorgeous vineyards, clock towers, even a bandits’ lookout on a mountain top rumored to have been a site of torture: unfortunate souls were said to be marched off the edge of the small fort, plunging down the cliffs to their demise. We docked at Melk, the end of our boat trip and the site of the world-famous Melk Abbey.

Our adventure didn’t end here however. We ate the most delicious pizza before climbing up to the Abbey, it was closing and our train was leaving soon so we just had time for a peek. Knowing this, we went in a side door and suddenly it was like time stopped. The inside of the abbey is breathtaking. Time passes. Shoot, what time is it?! Laura: “We have 11 minutes to get back down to the train station.” Here we go again! Cue up the bumblebee music: there go the Corlins! We came sprinting in to the station just in time to take a deep breath and boarded the train back to Wien.

We have never been a boring family. I wouldn’t change a thing about us, or the string of events that made up one of the greatest travel experiences of my life. Sometimes, waylaying your plans (even by accident) can be the surest way to have a real adventure and make the best memories. -Meagz

I am an ardent seeker of adventure. I am a voracious reader. I've a deep-rooted love for all things travel. I am a nerd. I like to play at a little bit of everything, but mostly photography, writing, and learning. My favorite things are the ocean, libraries, underdogs, stories, animals, and experiences. Also ice cream. And Doctor Who. And Post-It notes. Dancing, herb gardening, the milky way and the rest of the night sky. I've been an innkeeper, a dolphin trainer, a barista, a pretend flight attendant, a property manager and a keynote speaker. It's fair to say I'm either a great juxtaposition or a hot mess. I really like pirates. Sometimes I imagine I am cool by association. I married my best friend in the ruins of a historic pirate fort. He is the cool one. I seek to explore the world and write with a true passion for adventure crafting, and often, adventure surviving.

A Stairway To Fashion

imagination is the key

Sports and Movie comments and opinions

Just a small town girl who writes about Christian stuff.

Thoughts on Writing, Art, and Life